Only Woman, not Mother, is the Prohibited Category

Kalakantha Prabhu (and probably some others) have been circulating a paper titled “Suniti’s Ineligibility in ISKCON”, dated 11 January, which is saved and edited by someone named Anuttama.IC as per the document properties. Their paper explains why they think Suniti was ineligible to become Dhruva Maharaja’s diksa-guru on account of being a mother only and not because of being a woman. Their paper, however, has numerous flaws, many of which substantially discredit their stance.

There is, however, one argument they make that stands out as being spectacularly flawed in terms of both specious use of propositional logic and contempt for basic English grammar. In their paper, they say:

The first problem is that they completely nullify “woman” as a prohibited category, despite the fact that Srila Prabhuapda said “being a woman.” In their misapplication of propositional logic, they have overlooked the fact that a “mother” is a “woman”. If you  are a mother, then you are also a woman, and “woman” becomes a redundant term. And if you are a woman but not a mother, then according to their logic there is no prohibition at all. That means only “mother” is the prohibited category, and “woman” need never be considered.

The actual propositional logic is as follows: If B is a subset of A, then A AND B = B. In the same way “Woman” AND “Mother” = “Mother”. “Woman” as a term is completely unnecessary. (See attached graphic for illustration or Word document for further discussion.) 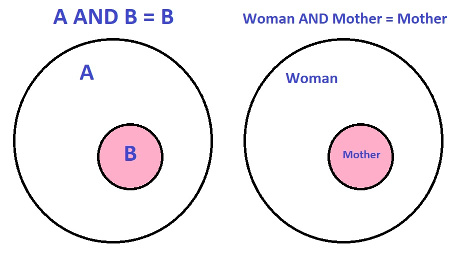 The correct way to read the comma is as a part of what are called “parenthetical” commas, and whatever is between parenthetical commas is just given for further information about some word or phrase without restricting it. For example, “Krishna Das, my only brother, came home after a long trip.” Because Krishna Das is a particular person, the phrase “my only brother” gives further information about him but does not restrict or modify the term it is connected to. That is how the phrase “and specifically his mother” has to be read in relation to “being a woman”.

The pair of commas enclosing “and specifically his mother” are parenthetical, and the Chicago Manual of Style (used by the BBT) and other style manuals and grammars are in agreement that parenthetical commas (or pairs of dashes or actual parentheses) generally indicate that a phrase is only intended to give us further information about the term it is subordinate to, without modifying it. Similarly, “and specifically his mother” is subordinate to “being a woman” and does not modify it; it is given only for our further information. Therefore, in Srila Prabhupada’s statement, Suniti’s being a woman is the only criterion that needs to be considered, since the grammar indicates that being a mother is not restrictive. (Please see the attached document for citations from the Chicago Manual of Style, etc. for further evidence.)

So, what happened to the argument in the paper written by Anuttama.IC and others is a case of “garbage in, garbage out.” They didn’t pay enough attention to basic grammar, so they misunderstood the relationship between the terms “woman” and “mother” that Srila Prabhupada intended. And then their misunderstanding became the basis of their logical reasoning, which also produced a too-good-to-be-true conclusion (for them) that necessarily requires also having to believe that Srila Prabhupada himself, not anyone else, in his own Bhaktivedanta Purports has spoken in error. This is not merely “garbage out” but quite troubling.

The bottom line is that standing by the conclusion reached by Anuttama.IG and others necessarily requires a reading of Srila Prabhupada’s books that is not in line with the grammar used, and not just for this particular passage. If grammar employed in Srila Prabhupada’s books, according to his order, can be so easily and frequently dispensed with, whether by readers or others, in pursuit of some fad or agenda, then does that not indicate that we don’t have so much love for Srila Prabhupada’s life work after all? Is that our future?