By: Akincana Staff
In: Uncategorized
With: 61 Comments

The excerpt below was translated from its original source, a news website in Brazilian Portuguese called Razões para Acreditar.

Verônica Monteiro, 23 years old, and Tatiane Alves, 25 years old, performed a beautiful wedding ceremony inside the Hare Krishna Movement in Taubaté (SP), one of the strands of Hinduism. Besides the fact that getting married is exciting, this was the first homosexual couple to get married within the movement here in Brazil!

“We married with the blessings of Krishna and the devotees. The only gay marriage within the movement was in Los Angeles, in 2009, and at that time it received many negative comments and now, 10 years later, we got married and could reinforce the idea that we are not this material body but eternal souls. Also, the 2009 wedding was not disclosed. I only came to know about it in 2017, when I started to research on this possibility” said Veronica.

The ceremony was held at the Bhakti Yoga House. They enlisted the help of devotees and parents to perform a beautiful ceremony!

“They didn’t have to help, but they wanted to and did it willingly. We are very grateful to all who helped us, devotees, parents, priest and Maharaj Chandramukha Swami, who is now my spiritual master and has given us his blessings” she said.

The except below was translated from its original source, an European Portuguese LGBT news website called dezanove.

“The wedding took place at the Bhakti Yoga House in Taubaté, in the state of São Paulo. We have no temple in Taubaté, the place where we hold the meetings is a devotee’s house. He uses the house as a law and accounting office, and as devotees are always ready to serve, he uses the place on Sundays to carry out the programs, with free yoga, kirtan (mantra chanting), spirituality chat, and finally a vegetarian and vegan meal. The devotees named the place as Bhakti Yoga House”, Veronica Monteiro tells dezanove.

“The movement does not discriminate against anyone, God does not discriminate against anyone. As a devotee named Abhiceta Dasa told me the first time I went to a meeting in Guarulhos: we are all spirit souls and not this material body”, continues Veronica Monteiro, who nonetheless admits that “some devotees have prejudice, a closed mind. And it happens in every religion, everywhere. We will always meet receptive people and others not so much, but if we don’t take the first step, we will forever stand still. When I saw the possibility, I started sending e-mails and messages to people who are advanced within the movement, including Maharaj Chandramukha Swami, a sannyasi, and ISKCON (International Society for Krishna Consciousness) spiritual master who answered me with all kindness and attention. He sent me several audios explaining how the movement sees marriage and same-sex relationships, and he told me that ISKCON was not ready to receive the marriage, but as God’s blessings are important to any relationship, therefore, if we were sure about our feelings, then we should go to the Brahmin priest Rama Putra and talk about the ceremony”, she recalls. 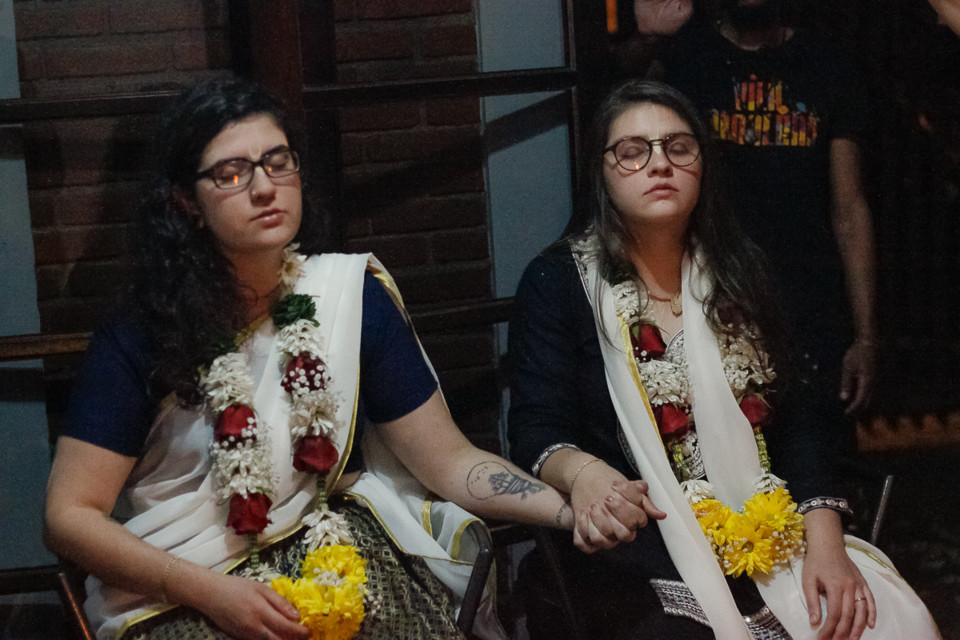 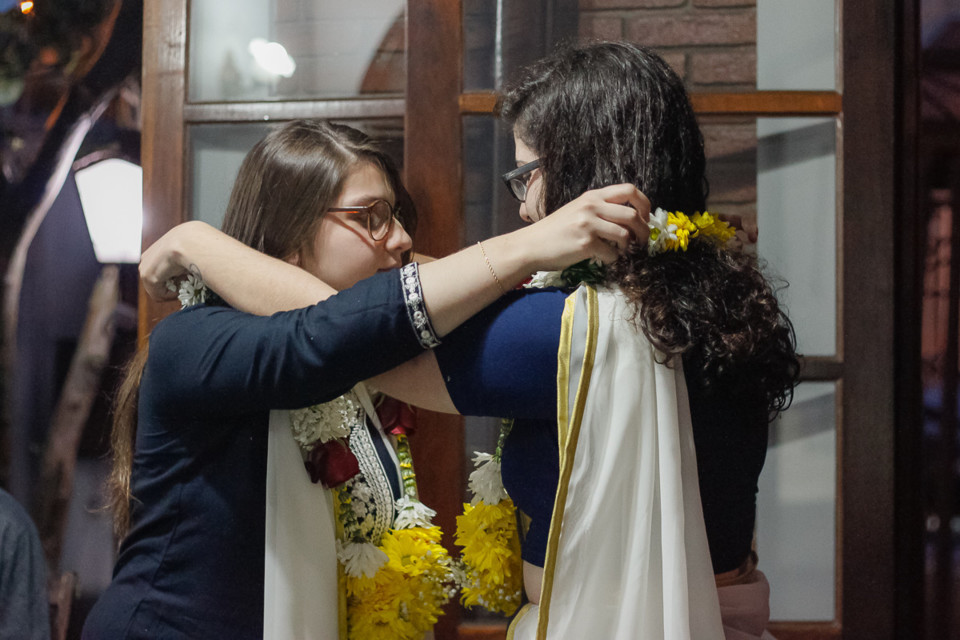 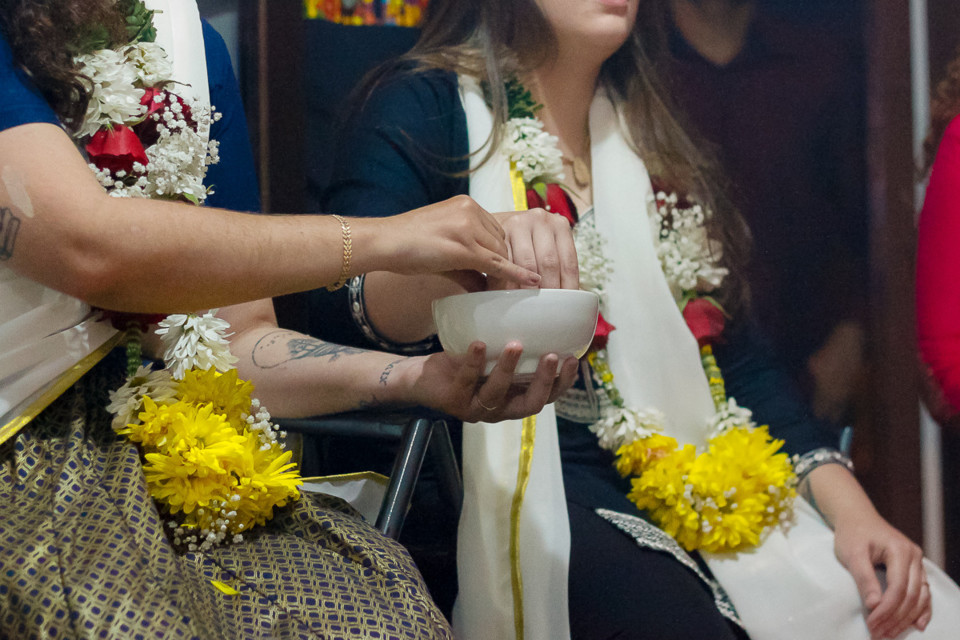 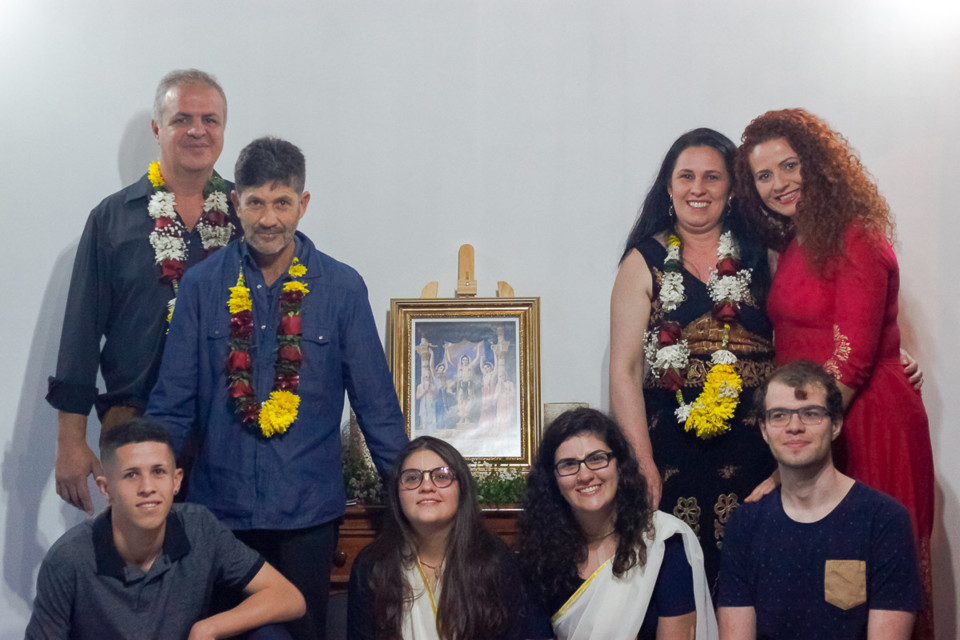 Here follows some background on the authorities that were involved in the ceremony: 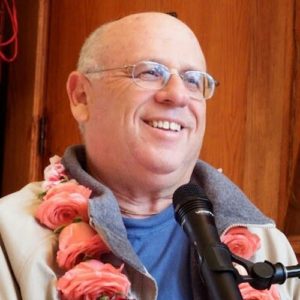 Hridayananda Dasa Goswami is currently serving as the GBC for Brazil, and he’s being assisted by Dhanvantari Swami as a co-GBC. ( source ) 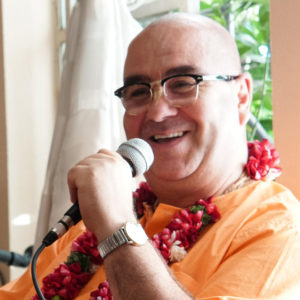 Chandramukha Swami: “In 1986, Chandramukha Swami embraced vows of renunciation (sannyasa) in the holy city of Mayapur, India, when he received the venerable title of Swami and became one of the leaders in Brazil ISKCON. Maharaj helped establish Vrajabhumi Ashram in Teresopolis, RJ. Maharaja is a writer and musician. He has authored over twenty books on yoga philosophy and spirituality. He has released eight CDs of mantras and meditation. Maharaja is famous for his ability to make the Vedic wisdom easily accessible to the lay public.” ( taken from the ISKCON Leaders webpage ). 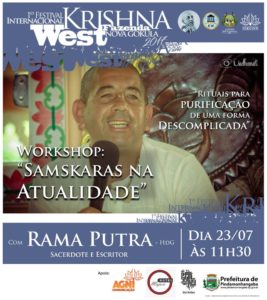 Rama Putra Das: The brahmana who is seen performing the fire sacrifice on the header photo in the original article is Rama Putra Das, who’s currently a leader of the Nova Gokula farm community, the largest of the official projects of ISKCON Brazil. He’s a disciple of Hridayananda Dasa Goswami.

Answering questions from our readers:

Amara Das Wilhelm asked: Very encouraging. There are actually many ISKCON devotees and priests who perform same-sex marriage ceremonies but always outside of the temple proper. I’m not sure what the Bhakti House is but I assume it is not the main ISKCON temple?

Bhakti Yoga House is not an ISKCON temple, but a place for a program that happens every fifteen days and is organized by an ISKCON devotee ( Narada Muni Das ). As far as we can tell, there is no other currently active program which is somehow connected with ISKCON in the same city ( Taubaté ).

Bhakti Yoga House has already been advertised on many occasions by the official page of ISKCON Brazil on Facebook. It also frequently receives ISKCON authorities as guest lecturers. Purushatraya Swami and Lokasaksi Dasa have already given lectures at Bhakti Yoga House, as it can be seen here  and here.