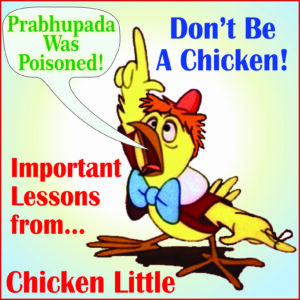 One of the repeating tactics heard from those who dreamed up the Poison Conspiracy (P-Con) is the threat of future legal action.   When they first wrote their script Tamal Krishna Gowami was accused of poisoning His Divine Grace.  A whole lot of effort went into disparaging his reputation to gain momentum with his detractors. That plot encountered unexpected difficulties when in 2003, Tamal Krishna Goswami departed in a Mayapur automobile accident.  Now, who could they sue if the primary suspect was no longer living?

From the point of view of the P-Con authors, this was not such a big problem.  The whole story was made up anyway so all they had to do was identify a different protagonist and re-write the P-Con script.  So that is exactly what they did and the revised P-Con storyline shifted the accusation onto Bhakti Charu Swami.  He was now the NEW person they blamed for murdering His Divine Grace!  That worked until 2021 when Bhakti Charu Swami was taken by the coronavirus pandemic while boldly carrying on with his preaching efforts.  We can expect that based on the long string of previous allegations Bhavananda Prabhu, who is still alive, will be the new person they will blame for the untimely malicious poisoning of His Divine Grace!

Like many children’s stories, the tale of Chicken Little provides an important moral lesson for our benefit.  It encourages us to ask:  How plausible is it that some of Srila Prabhupada’s most time-tested, capable, and loyal disciples went mad at the end and conspired to poison him?  That is as preposterous as Chicken Little running around shouting:  “The Sky is Falling!”

There are only a few type of people who fall for the incredibly strained P-Con fable.  Some promote it for vengeful purposes.  Some are just so suspicious of anything the GBC does they have no reason to believe it is not true. Some are so trusting that if they are told by a person they respect that it occurred, they will just blindly accept it.  Then there are those who can’t fathom why anyone would make up such a sordid tale.  Many simply don’t have the time to fact-check what is being alleged, or the skills to identify contradictions, half-truths, and completely fabricated mistruths.

To help the American people better understand the technique behind Nazi propaganda during WWII, Walt Disney rendered the story of Chicken Little into a powerful educational tool.   The deceitful tactics that made the Nazi’s so powerful can also be found in the way the P-Con has been rolled out for the last 20 years.  DECEPTION has provided several examples of the following four Machiavellian tactics Disney draws out in his rendition of the Chicken Little story.  They are itemized here:

#1 Use of flattery to convince insignificant people they are born leaders.
#2 To influence the masses, aim first for the least intelligent.
#3 If you tell them a lie don’t tell a little one, tell a big one.
#4 Use propaganda to undermine the faith of the masses in their leaders.

This chart provides specific examples of where the P-Con relies on this type of propaganda to keep the fraud of the millennia alive among the gullible masses. Readers are also encouraged to watch the Disney production of this classic child’s tale.  It is both entertaining and very eye-opening!

What The “Truth Committee” Learned from Chicken Little

Share this Rebuttal to the P-Con FRAUD of the Millennia with a friend!

Share:
2023-01-11
Previous Post: Reply to the Online Petition to the ISKCON GBC – by Basu Ghosh Das
Next Post: CPO accepts changing and conflicting testimony without questioning it