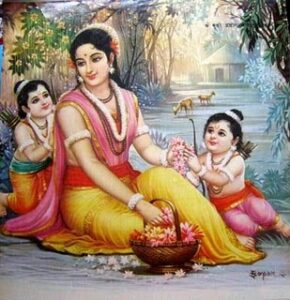 When Yamuna Devi tried to organize her own ashram Srila Prabhupada told her how it should be done – simple, 2-3 cows only, no men’s help, and no preaching.

At the same time he wrote to ISKCON authorities in the area that this desire for having an independent ashram was a defect and that it shouldn’t be supported by ISKCON.

And then a month later:

“The thing is cow protection is not possible for women. You can keep two or three cows, but on larger scale it is not possible. You should not try to take care of more. It is not women’s business. Women’s business is getting milk and making milk preparations. On the whole larger scale is not to be attempted by women. Manage a small asram, but don’t try bigger scale, then you require the help of men.

Don’t try manual exertion, then again there is mixture and that is not desired. Simply keep yourself aloof from men—chanting, many more times as possible, read books, worship the deity.” – to Yamuna, Feb 21, 1976

“Regarding Yamuna and Dinatarine, they want to live independently, that is the defect. A woman cannot live independent. According the the Vedic culture a woman is always to be protected by a man. Why they should purchase a house? We already have Los Angeles. If they want they can have a separate asrama supported independently of ISKCON. Every woman in America has money, so why do they want support? No, the BBT cannot give them loan. You may check that they are chanting and following the rules but do not get involved with their management. So far your suggestion that they sew clothes for the sannyasis Deities it is not possible. Sannyasis may have no connection with women.”

So clearly Srila Prabhupada wanted to support Yamuna in her idea but it didn’t fit with his plans for ISKCON and he wouldn’t authorize any support from the society. If they want to do something on their own they have to find their own funds, too.

Today this has become a default solution – various people setting up their own projects, financially independent from ISKCON, and we generally see it as a good way forward. Everybody’s busy doing their service, what’s wrong with that?

One thing is wrong – there is no cooperation. Instead of one big project we have lots of small ones, each pulling in a different direction. Take the example of the Prapanna ashram itself – it has been there for almost half a century but it’s only this week that G Keshava heard about it. ISKCON is only ten years older but it’s incomparably huge in every respect. See the difference between big and small?

Not to mention that female only ashrams are not suited for preaching at all as they supposed to stay clear of men.

Another paragraph from the same 13 Jan letter to Yamuna:

“Sita Devi, Mother Laksmi, wife of Lord Ramacandra, went to live with Valmiki Muni in a cottage. Although she was a King’s daughter and a King’s wife, she preferred to live very humbly in the cottage of Valmiki Muni with two sons in the absence of Ramacandra. That should be the ideal example. Women when not with husband must live very very humbly and simple life.”

This, btw, is another argument against FDG [female diksha-gurus] – female “sannyasis” are not supposed to preach but to become a guru in ISKCON one has to be a successful preacher first and foremost. It’s the success in preaching that triggers guru application and authorization process.

How can FDG proponents say that Srila Prabhupada wanted female gurus all along when he clearly writes in the quoted letters – do not start big programs to attract the masses? But when he gave sannyasa to men the idea was that they should use this position for even more massive and more vigorous preaching. Just look through his instructions to Yamuna again:

“Simply keep yourself aloof from men—chanting, many more times as possible, read books, worship the deity.”

Where is the scope for becoming a guru here? And we all acknowledge that Yamuna Devi was the most qualified female devotee at the time, if not ever.

Srila Prabhupada wanted our gurus to be first and foremost successful preachers, did he not? And he didn’t want single female devotees to preach vigorously and attract lots of people. Where is the scope for FDGs here?