By: Sundar damodar das
In: News, Srila Prabhupada
With: 0 Comments
Hare Krsna
Please accept my humble obeisances
All glories to Sri Guru and Gauranga, all glories to Srila Prabhupada
On this very special 125th Birth Anniversary of our dear Srila Prabhupada each and every devotee trying their level best to highlight Srila Prabhupada’s unique contribution and pastimes to the people of the world.
In that series, we have planned to organize a National Quiz Event based on ‘Abhay Charan’ which is a Video epic on the life of Srila Prabhupada produced by Srila Bhakti Charu Swami Maharaj spending the most valuable 10 years of his life to present it very precisely for generations to come.
It’s the most elaborate presentation on Srila Prabhupada comprising 45 episodes 30 min each. It was live telecasted on Doordarshan (Indian National Television) 1998 onwards and it attracted a good viewership.
So we have planned to have 45 episodes in 4 languages (Hindi, English, Bengali, Tamil) followed by a quiz, starting from 15th July up to 30th August.
The purpose of these efforts are-
1. We are trying to make reach at least 1.25 lakh people and present them to Srila Prabhupada through this video epic.
2. Video is the best means to spread information among people in general – help people to recognize the personality of Srila Prabhupada and his contributions.
3. A humble offering to Srila Prabhupada on his 125th anniversary and to HH Bhakti Charu Swami Guru Maharaja on his first Tirobhava anniversary.
We have attached the Poster and promotion video link in Hindi (similarly we have for English, Bengali & Tamil) is given for your kind blessings and guidance.
Promo Link:- https://youtu.be/k5NhfMJvedo
*All promotion material will be posted in the group which can be joined by devotees by the following link* http://hyperurl.co/AbhayacharanH
Prabhuji you may kindly help us by sharing this information and any suggestions for the event.
Also if we can get a video of your grace speaking on abhaycharan we will be greatly obliged.
Your Servant
Sundar damodar das 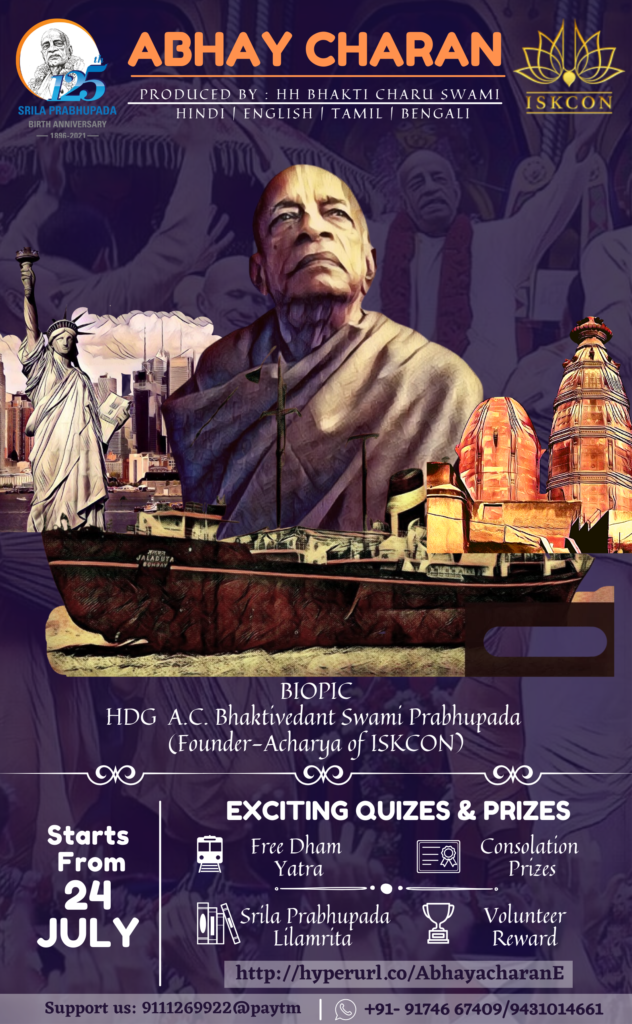