By: Padmanayana Krsna Dasa
In: Festival
With: 0 Comments 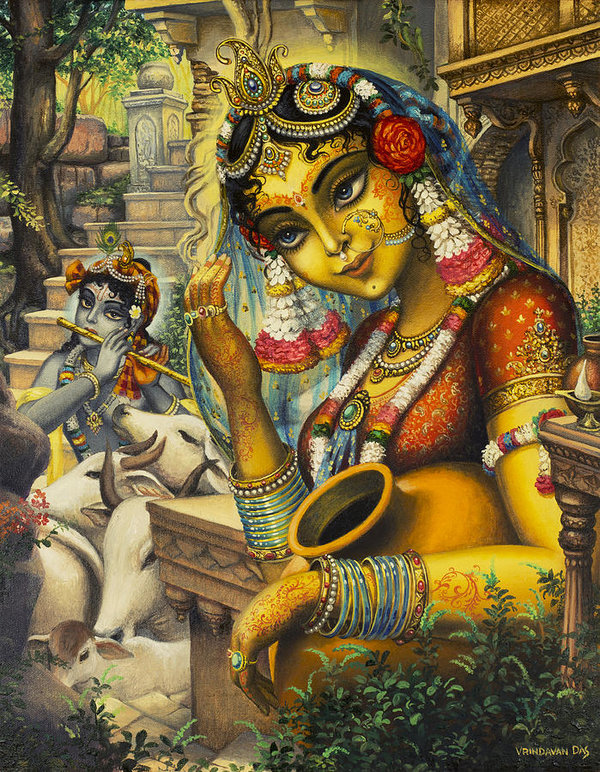 In CC Adi 1.5 it is said “The loving affairs of Shri Radha and Krishna are transcendental manifestations of the Lord’s internal pleasure-giving potency. Although Radha and Krishna are one in Their identity, They separated Themselves eternally”. Shrimati Radharani, as the highest devotee of Shri Krishna, derives the greatest pleasure in serving Him. She is the origin of all the Gopis and of all the Goddesses of Fortune (Lakshmi devi) who are engaged in the service of the Lord. She is the mainstay, the ideal and the ultimate refuge of all devotees embarking on the path of devotional service. Without first getting the mercy of Shrimati Radharani it is impossible to even approach Shri Krishna.

When the Lord descends, He is invariably accompanied by His loving associates. Five thousand years when Shri Krishna descended in His original form, as a cowherd boy in Vrindavan, Shrimati Radharani accompanied Him in Her original form. She appeared exactly two weeks after the appearance of Shri Krishna on the eighth day of the waning moon (ashtami). Shrimati Radharani was found on a lotus flower by Vrashabhanu and his wife Kirtida near the village of Barsana, a few miles away from Nandagrama. It is said that Shrimati Radharani first opened Her eyes only when Shri Krishna appeared before Her. Until that time Her eyes were closed.
Understanding the mellows of the relationship between Krishna and Radha is impossible from the mundane perspective. Understanding madhurya-rasa (devotion at the platform of intimacy), which is the highest level of relationship of a devotee with Krishna, is only possible in the most elevated stages of bhakti where there is not even a tinge of material contamination. Therefore Svarupa Damodara Gosvami has written: “The loving affairs of Radha and Krishna are not ordinary, material loving affairs, although they appear like that. Rascals and fools misunderstand Krishna to be an ordinary man. They do not know Krishna’s transcendental nature. They try to imitate Krishna’s rasa-lila, His dancing with the Gopis”. There is no offense greater than this. Devotees starting on the path of bhakti must carefully avoid such offenses. They must simply pray to Shrimati Radharani, as their most compassionate Mother, for mercy, for bhakti and for an opportunity to serve Shri Krishna. 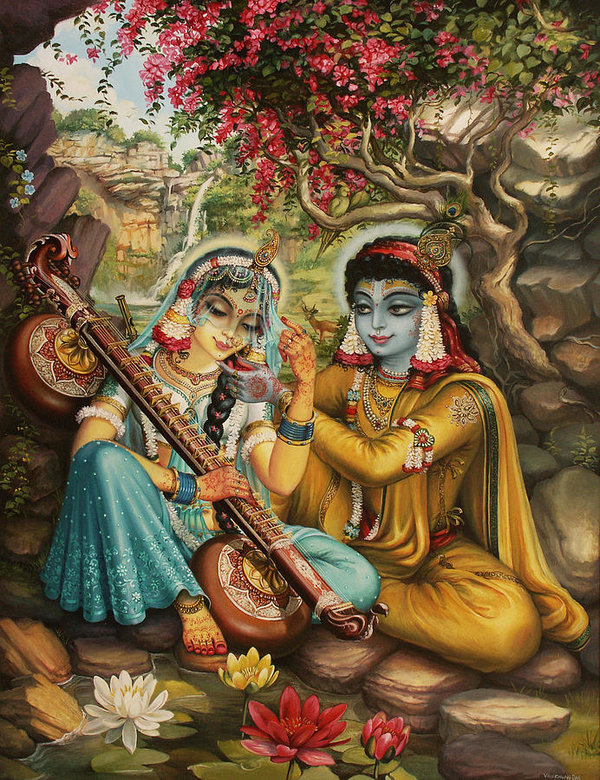 2) She is a fresh young girl;
3) Her eyes are always moving;
4) She is always brightly smiling;
5) She possesses all auspicious marks on Her body;
6) She can agitate Krishna by the flavor of Her person;
7) She is expert in the art of singing;
8) She can speak very nicely and sweetly;
9) She is expert in presenting feminine attractions;
10) She is modest and gentle;
11) She is always very merciful;
12) She is transcendentally cunning;
13) She knows how to dress nicely;
14) She is always shy;
15) She is always respectful;
16) She is always patient;
17) She is very grave;
18) She is enjoyed by Krishna;
19) She is always situated on the highest devotional platform;
20) She is the abode of love of the residents of Gokula;
21) She can give shelter to all kinds of devotees;
22) She is always affectionate to superiors and inferiors;
23) She is always obliged by the dealings of Her associates,
24) She is the greatest amongst Krishna’s girl friends;
25) She always keeps Krishna under Her control.
Krishna means ‘all attractive’, since He attracts every one to Him. But Shrimati Radharani attracts even Krishna. Although Krishna says vedaham samatitani – “I know everything” – He fails to understand Radharani. Krishna is acyuta (inconceivable), but for Him Radharani is inconceivable. Radharani is so great. Krishna thought, “I am full. I am complete in every respect, but still I want to understand Radharani.” This question obliged Krishna to accept the propensities of Radharani to understand Himself. So five hundred years ago Krishna appeared as Chaitanya Mahaprabhu, in the mood of Shrimati Radharani and with Her golden complexion, as His own greatest devotee. Krishna did this to understand the depth of devotion of Shrimati Radharani. 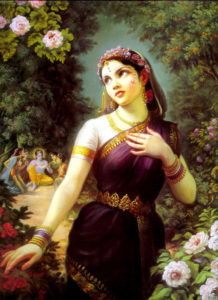 All glories to Shrimati Radharani !!