By: Amala Bhakta Dasa
In: Pastimes
With: 0 Comments

Though Lord Caitanya is known as Krsna’s hidden incarnation,
His biographers have preserved accounts of His displays of divinity.

SOON AFTER LORD CAITANYA began His movement for chanting the holy name of the Lord (sankirtana), many of His followers would sing, dance, and play musical instruments for many hours in glorification of Lord Krsna. Some envious brahmanas resented the Lord’s increasing power and influence over the people and decided to try to check Him at any cost.
These brahmanas complained to the Muslim Kazi, or governor, that Lord Caitanya’s movement was sinful and would result in Navadvipa’s becoming deserted. Many Muslims also complained, but mainly about the resounding noise of the sankirtana. All the fault-finders urged the Kazi to banish the Lord from the city.
These reports greatly angered the Kazi. So one evening, entering a home in which sankirtana was in progress, the Kazi broke a devotee’s drum. He then banned all sankirtana and threatened serious punishment to anyone who violated his order. Shocked and disheartened, the devotees informed Lord Caitanya, who then organized a massive civil disobedience march consisting of hundreds of thousands of devotees engaged in a thunderous sankirtana.
When the demonstration reached the Kazi’s residence, Lord Caitanya conversed with him on several issues, and the governor revealed an amazing experience he’d had.
“On the evening I broke the drum and forbade any further sankirtana,” the Kazi said, “I had a horrifying dream. I saw a dreadful creature with a human body and a lion’s face roaring loudly. He jumped on my chest and savagely laughed at me. Placing His nails on my chest, He said in a grim voice, ‘I shall tear your chest apart the way you broke the drum! You have forbidden the performance of My congregational chanting; therefore I must kill you.'”
“Horribly afraid, I shut my eyes and trembled. Then the man-lion said, ‘I have conquered you just to teach you a lesson. But I will be merciful to you because on that day you did not create a big disturbance. So I have forgiven you and not killed you. But if you do that again, I will destroy you, your entire family, and all the meat-eaters [the Muslims].'”
“After the man-lion said this, He left. I would like you to see the scratches He made over my heart.”
The Kazi then revealed his chest, and as the people there saw the scratches, they were astonished. Everyone realized that Lord Nrsimha, the half-man, half-lion incarnation of God, who had appeared long ago to kill the demon Hiranyakasipu and protect His devotee Prahlada, had again appeared for a similar purpose. But what most people did not know was that Lord Caitanya Himself was also Lord Nrsimha-and thus His sankirtana mission could not be checked.
The Kazi then revealed something equally extraordinary.
On the same day that he had dreamed about Lord Nrsimha, one of his soldiers said, “When I went to stop the congregational chanting, suddenly flames struck my face. My beard was burned and there were blisters on my cheeks.”
Every other orderly who had tried to check the devotees’ sankirtana reported a similar experience .
But even more remarkable was that some of the complaining Muslims, after hearing the Hare Krsna mantra, began to uncontrollably chant it, even though they had no desire to.
When the conversation ended, the Kazi said to Lord Caitanya, “To all my future descendants, I give this solemn order: No one should ever stop the sankirtana movement.”
His descendants have respectfully honored those words.

THE LORD REVIVES A CHILD

One night at Srivasa Thakura’s house, Lord Caitanya, along with His devotees, was deeply absorbed in sankirtana. During the festival, Srivasa Thakura was informed that one of his sons, who had been seriously ill, had just died. To avoid disturbing Lord Caitanya and His devotees, Srivasa forbade his family members from expressing their sorrow and grief at that time. Thus, the blissful chanting and dancing continued without tearful interruptions.
But when the sankirtana ended, the omniscient Lord Caitanya said, “There must have been some calamity in this house.”
He was then told about the death of Srivasa’s son.
“Why wasn’t this news given to me earlier?” He sorrowfully asked.
Then He went to the deceased body and said, “My dear boy, why are you leaving Srivasa Thakura’s house ?”
The soul of the dead boy re-entered the body and replied, “I’ve lived here for as long as I was destined to. That time is now over. So I’m going someplace else now-to wherever You’re sending me. I’m Your eternal servant, a living being who depends on You. I must act only in harmony with Your wish. I can’t do anything else. I have no such power.”
Hearing these words, all the members of Srivasa Thakura’s family received transcendental knowledge and felt happily assured. Thus, they felt no reason to lament or grieve anymore.
THE LORD REVEALS HIMSELF 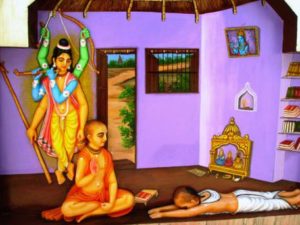 One day, in Jagannatha Puri, Lord Caitanya had a philosophical discussion with the famous scholar Sarvabhauma Bhattacarya.
After the Lord defeated him on every point, Sarvabhauma Bhattacarya thought, “Lord Caitanya is certainly Lord Krsna Himself. Because I could not understand Him and was very proud of my learning, I have committed many offenses.”
When Sarvabauma denounced himself as an offender and took shelter of Lord Caitanya, the Lord wanted to show him His mercy, so He manifested His four-armed Visnu form. Then, just after this, He manifested His original two-armed Krsna form, with a blackish complexion and a flute near His lips.
When Sarvabauma Bhattacarya saw this, he prostrated himself before the Lord. Then he arose and with folded palms offered Lord Caitanya prayers of glorification. By the Lord’s mercy, all truths were revealed to him, and he could understand the importance of chanting God’s holy names and distributing love of God everywhere.
From that time on, Sarvabhauma did not know anything but reverence for the feet of Lord Caitanya. And all his explanations of the revealed scriptures were in strict accordance with the process of devotional service.
Source: BTG, May 2007